There are so many wonderful people volunteering to help out with the game that answering e-mails about Yandere Simulator has almost become a full-time job! However, I still tried to make as much progress as I could manage over the past two weeks.

When the player performs an action that puts them in danger (such as equipping a conspicuous weapon, becoming bloody, becoming insane, standing near a corpse, etc) a notification will pop up at the top of the screen to inform the player that they are in trouble and that their reputation could drop (or worse) if they are spotted. What do you guys think of this feature? Is it lame? I’ll be sure to make this something that can be toggled off from the Options screen.

I’ve configured the game to spawn students based on data in a spreadsheet.

Now it will be extremely easy for me to add students to the game; I just add another row to the spreadsheet, fill in all the columns, and I can dictate every detail about a student’s appearance and daily routine. In test builds, this spreadsheet can be accessed by the player. In the final version of the game, you won’t be able to modify the students in the game’s story mode, but there might be a “Custom High School” mode where you can customize every student to your heart’s content. If you screw around with the spreadsheet in the test build below, I can’t guarantee that the game will still be able to run. I don’t recommend messing with it.

In this game, certain events will only occur at specific points in time. You might need to spend hours lying in wait for the perfect moment to ambush your prey. That might be so boring that it could kill the game! That’s why Yandere-chan’s phone is equipped with a “Pass Time” feature.

You can use this feature to skip ahead to a point in time that provides you with a certain opportunity. Passing time will also restore lost Sanity. It takes about one hour to restore Sanity from zero to full. Yandere-chan can spend a total of 11 hours at school. At maximum time speed, an hour goes by in 10 seconds. So, it would take about one minute and six seconds to speed through the entire day.

How does Yandere-chan pass the time? She gazes at a photograph of Senpai on her phone. She is so entranced by Senpai that hours will pass in the blink of an eye, and the world around her will become a blur!

I once discussed Yandere Vision a long time ago, but the latest implementation looks much better. If you hold down the “Yandere Button” during gameplay, certain things will be highlighted in Yandere-chan’s vision, even if they are behind walls.

Yandere Vision allows you to see characters through walls. This is a very powerful ability, so it will have to be balanced. You will have to “tag” characters before you can see them through walls. You “tag” them by taking a photograph of their face, and sending the photo to an “information broker” who gives you information about that particular student. Once Yandere-chan knows that student’s daily routine and their personality, she can mentally picture where they are at any point in time, which is why she can “see” that student through walls.

If a student hears giggling, but doesn’t see you, they will walk over to inspect the source of the noise. This is the equivalent of knocking on a wall to draw a guard’s attention in Metal Gear Solid, or throwing a coin to make a noise in Hitman: Blood Money.

For a long time, I’ve been struggling with trying to get hair physics to work within the Unity engine, but I’ve finally gotten the hang of it. Now I can begin implementing schoolgirls with long, physics-driven hair!

Here’s a little demo that you can download if you want to see the new hair physics in action:

This blog has been seeing some serious traffic recently!

So, just where has all of this new traffic been coming from? I decided to take a look at my blog’s traffic stats to find out. Yesterday, for example, the traffic came from…

1. Search engines
2. Niconico – Probably because of this gentleman.
3. Tumblr – There’s some pretty nice fanart coming out of this place!
4. VK.com – This is the Russian equivalent of Facebook. Hello, Russian comrades!
5. Twitter – Thanks to everyone who tweets about the game!
6. Facebook – Thanks for spreading the word about the game here!
7. YouTube – I’ve noticed a lot of entertaining Yandere Simulator videos showing up on YouTube lately! 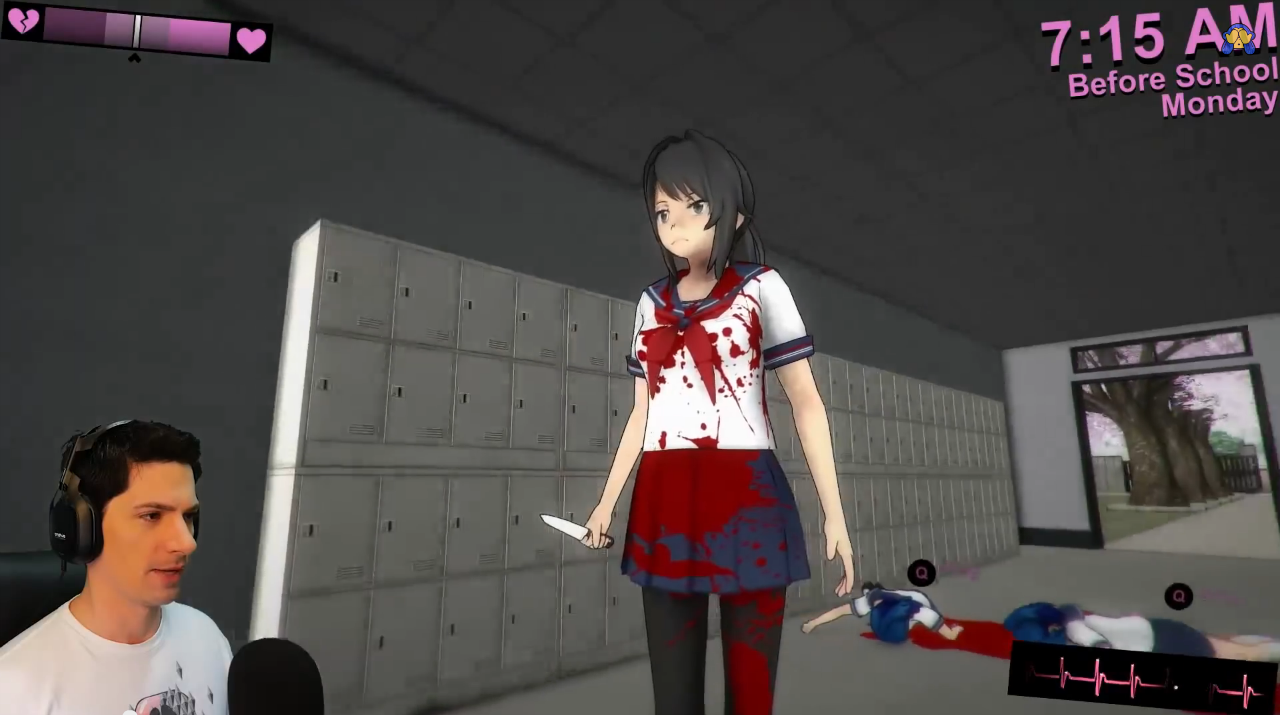 I’m a big fan of video game comedy channels on YouTube, and I have no problem with anyone who wants to upload footage of themselves playing Yandere Simulator test builds to YouTube. However, I have just one request: If you play one of the builds available on this blog, please don’t call it a “demo”. Please call it an “early build” or “test build”. The download available below is not a true demonstration of what the final game will actually be like; it’s just a sandbox level for testing out the game’s features.

I’m going to sound super pedantic for a moment. If you call the test build a “demo”, people might assume that the test build is meant to be a demonstration of what the final game will be like. This would be highly inaccurate, because the test builds have no goals or win/loss conditions whatsoever, and Yandere Simulator will definitely have goals. Also, if you upload a video where you’re playing a test build and calling it a “demo”, people might ignore the ACTUAL demo coming a few months from now, which will have far more depth than any of these simple test builds. It would be a shame if the REAL demo gets ignored because people thought they had already seen “The Yandere Sim Demo” played by some random guy on YouTube in December.

Thanks for your cooperation!