A new build is available! Click here to grab it!

You know the drill! Scroll down past the pretty fan-art by alicerbear to see a list of the latest bug-fixes. 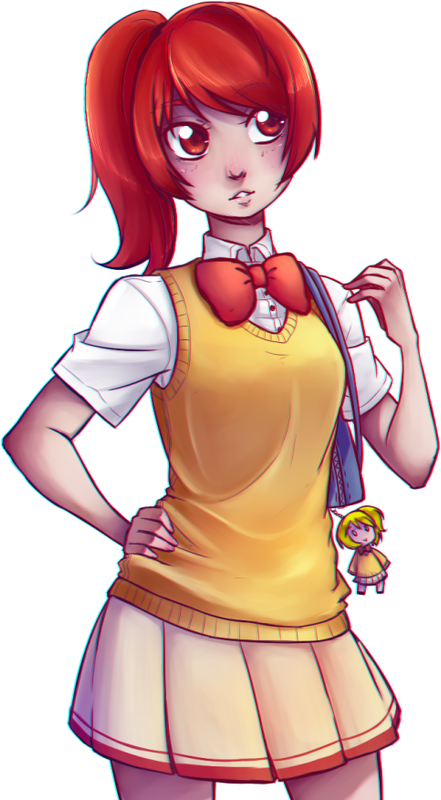 Unless some super serious bugs are discovered between now and October 1st, this is probably the last “bug fixing” update for now. I hope I took care of all the more noticeable problems!

There were some embarrassing bugs in the previous build (as usual) so I’ve prepared a new build with some fixes. I also found several ways to increase the framerate dramatically! I’m noticing a big improvement in the framerate, myself. Let me know if you get better performance out of this build!

As usual, scroll down past the awesome fan-art to read about what’s new in this build.

If that fan art isn’t your style, then maybe check out this short comic by SRealms!

Don’t worry, I’m aware that there are still more bugs that need to be fixed in the game. There may be more bug-fix updates in the next few days. (I just hope that the tricks I’m using to improve the framerate don’t result in any new bugs!)

I believe that the next “big” update should arrive on October 1st. (…Unless I spend the majority of the next 11 days fixing bugs, that is…)

It’s been 17 days since the last update, so I decided to upload a new build containing my most recent progress and a bunch of bug fixes.

To read about everything that is new in this update, scroll down past this beautiful artwork by alicerbear!

First, let’s get the miscellaneous additions and bug fixes out of the way:

The game’s newest feature is something that may not seem very exciting at first glance, but will actually be very important in the final version of the game. It’s the Student Info screen!

Taking a picture of a student will show you their Student Info, which can be accessed at any time from the Student Info menu.

Some students need to be stalked before their “Additional Information” section is filled out:

You might think that this new feature is boring, because it’s not directly related to harming your victims. However, this screen will actually be an essential part of the next elimination method that will be added to the game! Just you wait; very soon, you will learn just how important the Student Info screen can be!

If you have a keen eye, you may have noticed that there seems to be a new student in-between Pippi and Midori on the Student Info screen…just who could that be, I wonder?

Wow! The Quiet Contest got way more attention than I anticipated! There were 113 entries for the contest. That just blows my mind!

Some submissions were joke entries that were sent in for a laugh, but a lot of people actually took it quite seriously!

The final decision came down to a set of 21 super high-quality submissions. It was extremely difficult to decide on the winner of the contest, since it’s very hard to pick the “best” illustration when every one of them is so great. I’m very afraid of people saying, “Ugh, why did THAT artist win? Another artist should have won!” but I suppose that’s just the risk I take when holding a contest.

So, without further ado, I present the winner of the contest, the immensely talented PixelNoodle!

What an absolutely gorgeous illustration! I can feel the inspiration of Yoji Shinjawa’s brushwork. You feel it too, don’t you?

As I promised in my previous blog post, I’ll share with you the most remarkable “runners-up”, the people whose entries stood far above the rest:

I’d also like to call attention to these gorgeous illustrations by the incredibly talented 殇子 Black Chan:

Kokona certainly looks rather fetching in a swimsuit, doesn’t she?

In case you’d like to see every single illustration that was submitted for the contest, here’s a link to a file containing every single submission: http://www.mediafire.com/download/ie7m6ret6eycck9/QuietContest.rar

I’m honored that so many people were interested in entering the contest! I feel really guilty about picking one illustration and labeling it as the “winner”, since there were many other illustrations that I absolutely loved. I hope that all of the participants enjoyed the time that they spent creating their artwork, I hope that all of you enjoy seeing the beautiful images that were created for this competition!

My two-week vacation from Yandere Simulator was quite productive, but it ends tomorrow. I’m very eager to get back to work on the game!

By the way, how often do you think I should hold art contests? http://strawpoll.me/5490924

I’m on vacation until September 15th, but I still want to update the blog with as many interesting things as I can. I’d like to try something new, and see if anyone enjoys it.

What I’d like to try first is…a Fan Art Contest!

The deadline for the art contest is September 13th. On September 14th, I’ll make a blog post naming the winner of the contest, and show off the illustrations that almost won the contest.

The contest rules are:

If you need to know any other specifics, please ask in the comment section below.

In case you’ve been living under a rock for the past 2 years and don’t know what Quiet looks like, here are some reference images:

If you would like to see reference images of Yandere-chan, you can find one here and one here.

If people seem to enjoy the idea of a fan art contest, then there might be one contest per month, with a different reward each time!

So, what do you think? Is this a good idea? A bad idea? Do you have any ideas for fun fan-engagement activities? Please let me know in the comment section below!

If you’re looking for information about the latest build of the game, click here!

The folks over at RockyBytes.com have taken the time to compile an infographic about Yandere Simulator! They clearly spent a lot of time working on it, and most of this data is very interesting to me, so I’ve decided to share their infographic with you all!

Be sure to visit this blog tomorrow to hear about the contest that I’ve been planning!

EDIT: Bugs were found and fixed. A new build is now available.

School Atmosphere has finally been added to the game! This new feature affects almost everything about the game. Here’s a video that explains all of its current effects:

Here’s a full list of everything that’s new in this build:

I’m going to take a two-week vacation from game development now, but I have some noteworthy blog posts planned for the near future, including a contest that I’m very excited about! Please keep checking in for updates!