It’s important to me to make sure that the game’s protagonist has a unique and memorable appearance. I’d like her to be easily recognizable so that people can say, “Oh, I know that character, I know what game she’s from!” and tell her apart from other anime girls. I’d like Yandere-chan to be the “face” of the game, appear in the promotional art, etc.

I’ve teamed up with a talented artist who goes by the name of “aea” to produce some character designs for the game. I’m not sure how many revisions we’ll go through before we nail the final look of the main character, but I think the first draft looks absolutely awesome, so I wanted to share it: 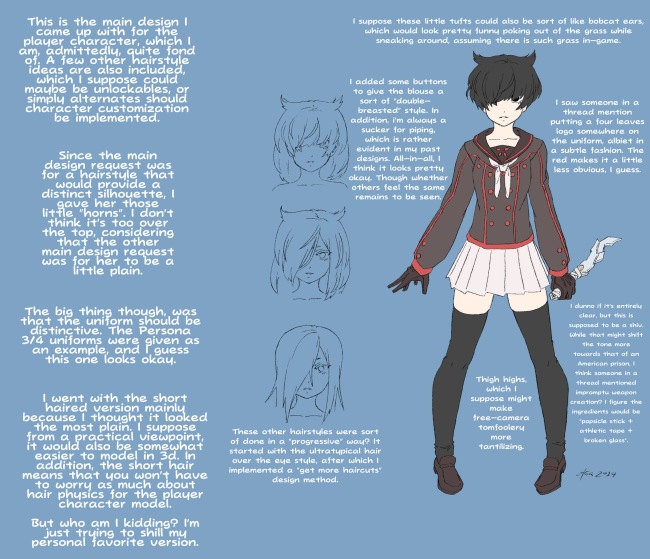 I’m hoping to wind up with a character who has a signature trait that makes her easy to identify; her personal trademark. I asked aea to design a character with unique silhouette, and in this design, he’s given her tufts of hair on her head that resemble horns, or perhaps bobcat ears. It definitely achieves the desired effect; I can’t think of another character she could be mistaken for!

The “horns” also carry the added bonus of making her look slightly devilish, which suits a serial killer. However, is that too on-the-nose? “She’s a bad person, therefore she gets devil horns.” Is that how it comes across? Or, is it subtle enough to not invoke that kind of reaction?

My philosophy towards the school uniform is the same as my thought process regarding the character; I want it to be unique from other school uniforms, so that people can instantly recognize what game it’s from when they see it.

I’d like to ask you what you personally think of this design. How do you imagine this character? How do you think she should look? Keep in mind that her primary objective is to be stealthy and inconspicuous. With that in mind, should she look as plain and non-threatening as possible? Or would a sinister, almost “predatory” appearance suit a stealth game about hunting and killing? I think this design strikes a nice balance between the two – but what do you think? What would you change about it?

What does this mean for character customization?

My desire to have a main character with a memorable appearance runs contrary to the concept of allowing the player to customize the character and design his own Yandere-chan. I understand how fun character creation is, but I would highly prefer to give the game a “face”. Ask yourself this: If someone sees a screenshot from Yandere Sim, how will they be able to tell what game it’s from? If someone sees a customized Yandere-chan, how will they be able to recognize what character she is or what game she is from?

This doesn’t mean that character creation / customization is entirely out the window, but it’s not the option I’m currently leaning towards.

Please forgive me. I had so much fun making Yandere Clicker that I decided to update it.

Now you can buy upgrades to stab Senpai even more.

There’s still a lot more I could add to this game, like achievements and perks that boost the effectiveness of your upgrades, but I think I’m done working on this thing for a while. I should get back to the development of Yandere Sim now… I got a little tired of working on Yandere Sim, and decided to take a little break from it by making a silly game for fun. (Actually, this thing doesn’t even qualify as a game, because you can’t win or lose…)

The only website I know that lets people upload web games is Kongregate, so I decided to upload the game there.

The idea was to make a parody of Cookie Clicker, except instead of clicking a cookie, you are a Yandere girl stabbing a dude.

If anyone thinks this game is amusing, I could update it with more features. I can add upgrades and achievements, like in Cookie Clicker. What kind of upgrades should you be able to buy, though? Hire other Yandere girls to stab for you? Upgrade your knife so each stab counts as multiple stabs?

Please note that this doesn’t mean that I’ve stopped working on the original game; I just decided to take a short break and made this for fun. This doesn’t actually hinder the development of the real game.

Last night, I had the pleasure of speaking to an actual Japanese high school teacher about high school life in Japan. I met him in a chatroom a year ago, but I never thought of asking him for details until last night. Here is some of the information that I gained from him. Please note that some of it may be exclusive to the particular Japanese high school that he works at.

First, I’ll start off with a time-table:

If we want to go full school simulation, then the game would follow a schedule exactly like this one.

In some Japanese high schools, the students stay in one classroom, and the teachers change classes. This would mean that the 10-minute gaps between classes are not playable sequences where you can walk around the school. This would mean that the only time you’re able to walk around the school is for 60 minutes before classes begin, 35 minutes during lunchtime, 15 minutes during clean-up time, and 135 minutes after school.

If we choose to set this game in a school where the students have to change classes during those 10-minute gaps, then there are potentially 6 more opportunities to walk around the school, but for much shorter periods of time.

I was also sure to ask him what is suspicious and what isn’t suspicious to see a student doing.

He also pointed out another important detail. These are middle-school outfits:

And these are high-school outfits:

So, what do you think this information should mean for the game? What time(s) of day do you think the gameplay should take place? Should the player be allowed to take every possible opportunity between classes to set up traps, steal things, conceal and move weaponry, and socially sabotage their classmates? Or should the player be given a small number of opportunities to move around for a long period of time, such as the lunch time-frame and the club activity time-frame?

I’m sorry for not updating during the last few days. I was improving the controls and the camera, and that’s worth posting about, because it doesn’t look exciting or interesting in a screenshot. I also got the cover system working.

Today, I added the ability to find weapons, equip them, and store up to 3 of them in an inventory.

When you are using a Keyboard to play the game, the Inventory interface will look different.

This inventory is not necessarily the final design; I just threw it together because I needed a graphical interface to use while getting the weapons to function. Perhaps it would be a better idea to use an entirely different kind of inventory; perhaps a “Tetris Style” inventory like in Resident Evil 4, so the player can have fun organizing their weapons?

When you are nearby a weapon, a faint button prompt will appear over it, along with its name. When you are close enough to pick it up, the prompt and name become clear to let you know that you are currently highlighting that weapon. 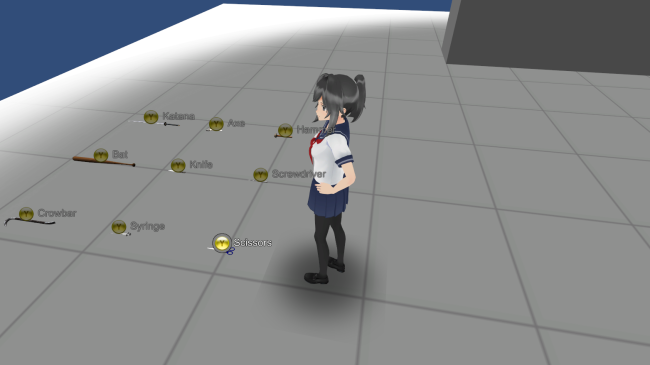 If you are already carrying a weapon of that “Type”, the game will tell you that you’re going to be swapping one weapon for another.

This brings us to a quandary that I’ve run into…

I need your help!

The reason I need to know how to categorize the weapons is because it will determine how I should handle the game’s inventory. If the player finds two weapons of the same type (scissors and screwdriver, both are small and inconspicuous stabbing weapons), for what purpose would the player want to pick up both of them? Should I allow the player to carry around multiple weapons of a single type, or disallow it?

I’m also not sure how many weapons the main character should be able to hold. How many weapons is too many for a schoolgirl to carry, before you can’t suspend your disbelief anymore? Or is a Yandere game already so silly that I shouldn’t bother keeping the inventory realistic?

If you’re interested in helping out, please give me your opinion on these topics:

Today, I worked on the cover mechanics. The protagonist can now “stick” to a wall and walk alongside it, like in most stealth games. I’m using a 3D model that comes with a bunch of game-ready animations, but it doesn’t include stealth animations…so, I had to improvise.

Here, you can see the protagonist sticking to cover. The temporary placeholder animation I’m using is a “nonchalantly leaning up against a wall” pose. This looks much different than the type of animation you would usually see in a stealth game…but I’m starting to wonder if it might actually be appropriate.

The game takes place in public places, and the protagonist is supposed to project the image of an innocent, ordinary girl. Traditional stealth game animations might look out of place here. Perhaps the character should have more “casual” animations – animations that do not draw attention or make her look suspicious. Maybe this particular animation (where she’s leaning up against a wall) is actually something that should stay in the game?

What do you think? Leave a comment if you have an opinion on this subject.

Today, I worked on stuff that isn’t easy to show with screenshots. Better control scheme, smoother camera, less clipping, nicer transitions between animations, improved collision detection, the ability to crawl, the ability to walk up and down stairs, etc.

None of that stuff is really exciting to see in a screenshot, so instead, I’ll show you a screenshot I took while testing ragdoll physics. Framerate was still smooth with over 20 dead girls flopping around.