Yandere Simulator has been in development for over 7 years. That’s unusual. What’s the holdup?

In this blog post, I’ll attempt to explain the problem.

43 seconds into this video from January 16th, 2017, I made a vague comment about how “a lot of stuff […] going on in my personal life […] took up a lot of my time, and took a lot of my attention away from Yandere Simulator”. I never divulged the details, but now that the situation has intensified, it has become necessary to talk about it.

Starting around January 2017, I began to receive massive amounts of harassment. This was the point in time when people began to:

Many content creators receive harassment, but what people have been doing to me has gone far above and beyond what a person usually experiences on the Internet. I wish I could be an emotionless robot or a solid stone wall that is not affected by this stuff, but the truth is that, yes, it has affected me. Receiving all kinds of abuse and mistreatment on a daily basis gradually impacted my mental health, resulting in depression, lost enthusiasm, lost motivation, and most importantly, lost productivity.

If I had to explain it with a graph, it would look like this: 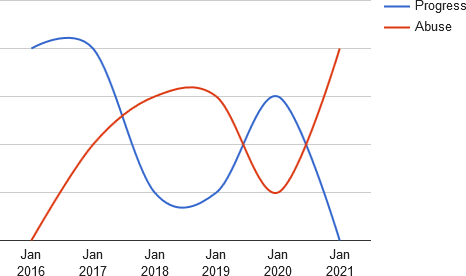 I cannot possibly overstate how much of an impact the harassment has had on development. If the harassment had never happened, Osana would have been released years ago, and the game might even be finished by now.

The answer to all three questions is the same thing: Misinformation. People are constantly saying things that aren’t true – things that cause them to feel justified in treating me like garbage.

“Yandere Simulator is made entirely of stolen assets!”

“YandereDev streams video games all day long instead of working!”

“YandereDev kills Midori because he hates his fans!”

“YandereDev is prolonging the game’s development to milk his Patreon!”

“YandereDev wants to abolish the age of consent!”

None of these statements are true; each one of them is false, and they were all debunked years ago. However, people keep spreading these dumb narratives anyway.

Whenever I saw people spreading misinformation, I recognized that these untrue accusations had the potential to do severe damage to my reputation. So, I blocked/banned anyone who spread misinfo, and deleted their messages.

When people saw negative messages disappearing, they assumed that I was “censoring criticism”, which led to yet another false narrative:

No, that’s not the case. You can’t call something “criticism” if it isn’t even true in the first place. However, “YandereDev can’t take criticism” is a more entertaining and scandalous narrative than “YandereDev prevents the spread of misinformation,” so that’s the narrative that people went with.

There is no end to the false narratives and untrue accusations that other people create about me. I’m not trying to sound melodramatic here, but I feel like it’s not an exaggeration to say that I’m at the center of the largest misinformation campaign that has ever occurred in the history of the game industry. I can’t think of a single game developer who has ever been targeted like this before.

All of the misinformation above was picked up and spread by clickbait YouTubers who made tabloid-style videos demonizing me and vilifying me, causing literally millions of people to develop false perceptions of me. And, after that many people were tricked into believing that I am an evil villain who deserves mistreatment, harassment skyrocketed. As a direct result, my productivity plummeted.

“But, YandereDev! There are screenshots and video clips proving that you’re a bad guy!”

You can have a real screenshot of something that really happened, and you can use it to paint a completely false image of someone.

Imagine that I have a photo of you drinking a beer; this doesn’t prove that you’re an alcoholic. But, a dishonest clickbait YouTuber could hold up that photo and make the false claim that you’re drinking beer every hour of the day. This is basically what happened to me, but on a much larger scale. I elaborate about this on the Debunk page.

Way ahead of you. I stopped using social media years ago. But, I still need to use e-mail and Discord to talk to existing volunteers and recruit new volunteers. So, there is no way for me to completely avoid seeing a daily flood or harassment messages, even when I keep my exposure to the Internet as minimal as possible.

The next thing I need to explain is that, when you are put into a situation like this, you become incapable of thinking about anything else, and spend all of your time with very dark thoughts:

When those are the only thoughts that are swirling around in your head, every waking moment of every day, you can’t exactly focus on work. The majority of your time is spent asking yourself, “If my future has been completely destroyed, why should I even bother?” and struggling to motivate yourself to get work done. You can be sitting at your computer with your fingers on your keyboard, and yet you can find yourself completely unable to type a single letter, as a result of being too depressed and miserable to lift a finger.

I can’t think of anyone who has ever been put into a comparable situation, and managed to recover. Once you have been labeled as “This person doesn’t deserve any empathy or compassion and it’s perfectly okay to abuse them as much as you want,” it’s pretty much over. That’s a lifelong label, even if you don’t actually deserve it.

Developing a video game is pointless, if nobody is going to support your game because they’ve been brainwashed into believing in a false version of you that isn’t even real. Thus, if your reputation is being tarnished by false narratives, debunking the untrue accusations becomes a higher priority than game development.

I don’t want to make videos about anything but game development. However, at this point in time, it may have become necessary to create a video (or multiple videos) going point-by-point down the list of every single false accusation and systematically debunking them all one-by-one, with receipts whenever possible. But, even if I release a video that successfully dismantles every false thing people say about me, there is a still a chance that it won’t do me any good, for one very simple reason: 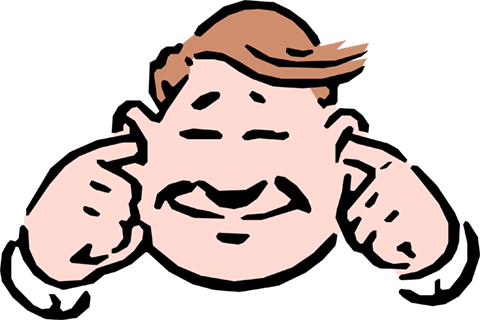 If you really, really enjoy the sensation of ridiculing and shaming other people over the Internet, you’ll just plug your ears and dismiss everything I have to say in my defense, and continue believing whatever mistruths you wish to believe, so that you can continue to feel justified in engaging in all the fun harassment that you enjoy. There is literally nothing I can do to stop that.

Harassment isn’t the only problem, either. The Anti-YandereDev community convinces my fans to stop financially supporting me, putting me beneath the poverty line and putting my future in jeopardy. The Anti-YandereDev community hacks my accounts and sabotages the game’s development in various ways. Every day, there is some new drama that other people have created, some new mess to clean up – something else that takes my time away from development.

Under the circumstances described above, is it really a surprise that the game has been in development for over 7 years? It was always going to take a long time because of its ambitious nature, but let’s be real here: it probably would have been finished by now if it wasn’t for all the problems that other people are constantly creating for me.

Depression, lost motivation, lost enthusiasm, acts of sabotage, constant harassment, character assassination, lost financial stability, hatemail on a minutely basis, drama being forced onto me every day – each one of these things is like a heavy weight tied to my body, and all of those weights are causing me to progress forward at a snail’s pace instead of moving at my maximum speed. 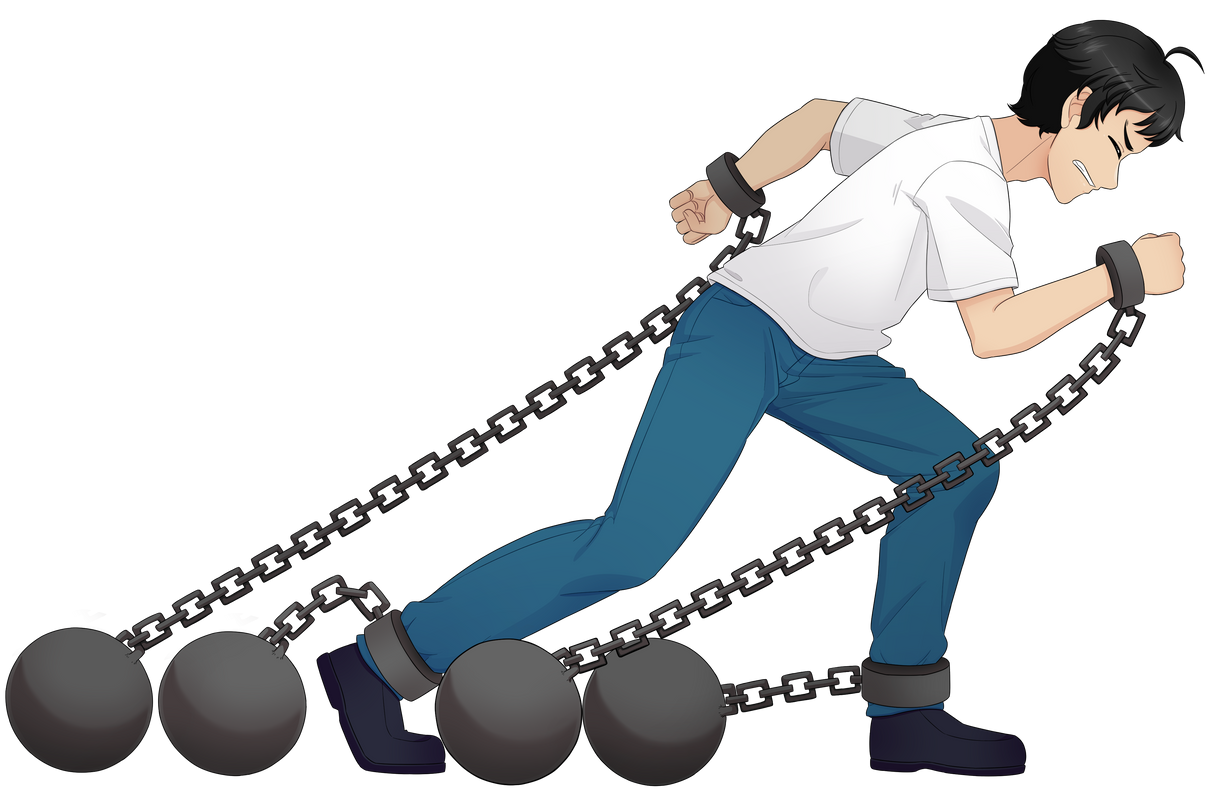 And that is the reason for the game’s development speed.

If you treat someone like garbage, they will work slower.

If you want someone to work faster, you have to stop treating them like garbage.

Scroll down for a list of bug fixes in the latest build.

This list is especially short, because I’ve been focusing 90% of my time on Osana and only 10% on other things within the game.